Barbie’s had a make-over – does it really matter? 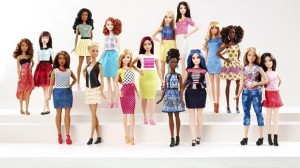 Barbie’s had a make-over – does it really matter?

It is the 1960s. I am six years old and have just put my Barbie dolls away very carefully in their box, like a good, obedient and satisfied little girl. Today, I may not recognise my old Barbies. I have got so many options. Mum or dad can now buy me a Barbie who is short and curvy, or thin and tall, white Anglo-Saxon or a woman of colour. Barbie has become politically correct.

But back to my six-year-old self. I’ve put away Barbie now, and I’m tucked in my bed, with dad about to read me stories about Cinderella, Little Red Riding Hood and Hansel and Gretel – frightening stories that taught girls they would only live happily ever after if they were good girls and adhered to female stereotypes around being a beautiful, gentle, obedient and compliant wife. Though it is more than forty years later, I can still feel the way my heart beat in my chest because, although I didn’t have language for it at the time, my six-year old self knew violence when I encountered it, even if it was in a fairytale.

You could say my upbringing was very conservative. We followed Christian principles and went to church twice on Sundays. Mum and dad instilled in me the value of hard work and never giving up once I had started something.  We were taught not to pursue materialism or wealth for its own sake. The stories my parents read to me imparted additional values and behaviours they believed were critical for surviving in life, most importantly that if I conformed to the perfect-girl stereotypes implicit in the princesses in fairy tales and the image of Barbie, things would work out for me.

Yet the stories I paid attention to and the games and toys that influenced me changed as I grew up. At a certain point I stopped relating to Cinderella’s tiny feet (I grew into a shoe size 41 in my teenage years). Barbie was abandoned in favour of games like Twister and Lego bricks. I picked up adventure books like The Famous Five, where girls and boys equally shared in adventures. In the 1970s I became enthralled by the comic books and TV shows around Wonder Woman, and loved watching the first Princess Leila as a heroine in Star Wars. Both these women are beautiful, but also capable and resourceful, fearless fighters in the war for justice, love, peace and gender equality. Gradually these messages began to influence my earliest feminism. The impact of gender stereotypes and conservative values that my parents instilled in me, with the best of intentions, started to dissolve as I grew up and formed my own views.

These days, the stories that inspire me are memoirs of women leaders at the top of their game. I laughed and cried throughout Magda Szubanski’s heart-rending memoir, Reckoning and it helped me make sense of some of my own childhood experiences. I was moved by Anna Bligh’s practical and optimistic biography, Through The Wall: Reflections on Leadership, Love and Survival. I couldn’t put down Christine Nixon’s book on her experiences as the first woman Chief Commissioner of Police in Victoria, in Fair Cop and want to be as confident and outspoken as she. I was outraged reading about Julia Gillard’s struggles and challenges as our first female Prime Minister in My Story and want women to claim their rightful place on the leadership table, free of misogyny and prejudice.

I tried to be a good girl once, like mum told me to be. It didn’t work when I experienced the real world. I learned how to fight for what I believe is right and for my place in the world. Stories of struggle and triumph paved the pathway that led me there.

Don’t get me wrong. There is a whole world of wrong in gender stereotyping. I abhor walking into toy shops and seeing the store segregated on gender lines – girls to the left, boys to the right, with toys designed specifically for each. All power to parents insistent on breaking down these stereotypes and encouraging their children to play with whatever toy they wish and grow up to be whoever they want to be.

If as a parent you feel like a more responsible parent buying one of the new, short a curvy Barbie dolls, go ahead. But children adapt to messages as they grow up. Don’t feel too anxious by allowing your girls to play with Barbies, by reading them fairy tales or dressing them in pink. Women are not docile, fragile beings, accepting any implicit message that comes their way. I believe many girls are just like me. As they grow up they choose their own heroines, they develop their own, authentic identity and find their own voice.